OPC Unified Architecture (UA) is the new generation of OPC. The first parts of the specification were released August 2006, with a full phase I release in February 2009.

OPC Foundation has developed UA in recognition of the following factors: 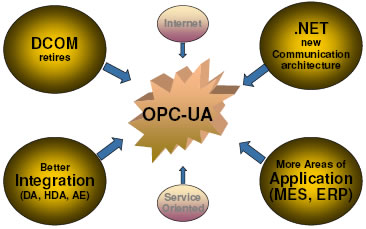 The UA initiative offers a single coherent data model, and uses web services for primary transport. A .NET (WCF) API will also be offered for developer convenience and DCOM-like performance.

OPC UA is based on few main principles that highlight key benefits for users... MatrikonOPC, key member in the OPC foundation, touches briefly on those principles and benefits. Read more here!

OPC Foundation has recognised that cooperation with other standards bodies is critical to acceptance throughout the enterprise. Initial UA specification sections will address the core areas of DA, AE and HDA. In parallel, OPC Foundation is working with bodies such as MIMOSA, ISA and OMAC to extend the UA standard to Batch, Asset Management and other areas.

Key milestones in the history of OPC UA:

The Outlook for UA

Phase 1 is UA, as desribed above, is just the first step. OPC Foundation is setting up a Working Group to take UA through it's next phase.

The OPC Foundation page on UA includes plans for timescales and deliverables.

OPC Foundation has published Release or Draft versions of the first 11 (of 12) initial parts of the UA specification. These downloads are available only to Foundation members.

Core specification parts "define the structure of the OPC address space and the services that operate on it":

Four "Access Type" parts build on the core framework defined by parts 2 through 7:

See our UA SDKs/Toolkits and Free Stuff pages for UA downloads from OPC Foundation and vendors.

new OPC Foundation began this series of excellent webinars for developers in April 2010.

The 2007 UA DevCon was held over 3 days during June in Scottsdale, AZ. OPC Foundation has released PowerPoints and screen capture videos for more than 20 of the DevCon presentations. These are available to Foundation members and non-members alike.

OPC Foundation has published an excellent introduction to the Unified Architecture - a presentation given at ISA 2005 by Foundation Technical Director Jim Luth.

The ISA 2005 OPC UA presentation is available from the downloads area of the Foundation site (Acrobat PDF or PowerPoint 2003 format).

The presentation shows that legacy COM-based OPC software may be accommodated through the use of Foundation-provided "UA Client Proxy" and/or "UA Server Wrapper" components. The UA Client Proxy allows existing clients to connect to UA servers, while the UA Server Wrapper allows UA clients to work with COM servers. Using the Proxy and the Wrapper together replaces DCOM with the new UA transport.

UA DevCon 2005 was attended by more than 130 people, and presentations given at the conference are now available to download.

White paper: "OPC UA: 5 Things Everyone Needs To Know Whitepaper" - This whitepaper talks about: What is OPC UA, how does it help you, and where can I get it? These questions are best summed up in the five things everyone needs to know about OPC UA.

White paper: "Implementation of the OPC UA Information Model for Analyzers" - discusses selected aspects of the OPC Unified Architecture information model. The white paper is intended for process architects and software developers to help deployment of OPC UA-ready solutions in real production environments. The general scope of the discussion makes the paper a case study that can be useful for the deployment of any OPC UA product.

White paper: "The OPC UA Security Model for Administrators" - discusses how to use the OPC UA security model to ensure application and transport security. The target audience for this document are systems administrators and end users. A second whitepaper will discuss the security model from the perspective of a software developer.